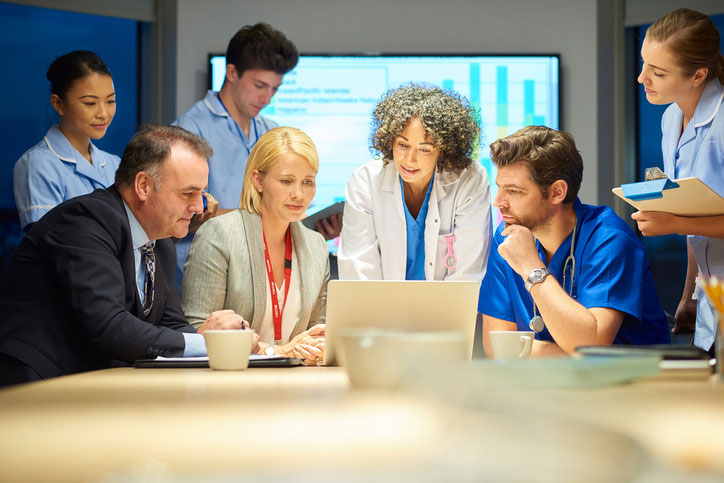 It seems like there is never not a time when healthcare administrators are facing major challenges in the industry. Ten years ago, it was widespread lack of insurance coverage, driven in part by the Great Recession. Ten years before that, it was rapidly escalating drug prices– which never really went away, incidentally, you just got used to them.

There’s no question that the American healthcare system is convoluted. A history of patches and half-measures covering those past challenges has left a rickety structure in place… one that America’s healthcare administrators have the tricky job of trying to operate efficiently.

In doing so, they have to keep patient outcomes at the top of their list, while still minding the actual business of healthcare. The dollars and cents all have to add up at the end of the day, staff have to be compensated adequately, the plumbing and electricity have to work. It’s a big job, and the only way to stay on top of it is to keep track of what next year’s challenges are going to be…

The healthcare staffing crisis has been coming on for a long time but the slowly rising temperature is about to hit a boil thanks to a few recent surprise developments. In May, the American College of Physicians, in conjunction with a number of prominent specialty physician associations, wrote a letter to the U.S. Citizen and Immigration Services highlighting the denial of visas to nearly 4,000 medical students planning to perform their residencies in the U.S.

In an environment where other industry groups were already predicting a shortage of some 100,000 doctors by 2030, that’s particularly bad news. There’s no domestic surge in enrollment to replace those students. Not only does this exacerbate the provider shortage, but it disrupts the pipeline… medical schools lose faculty, teaching hospitals have to turn away patients. It’s hard to spool that process up again to meet future demand.

Administrators will have to confront the hiring and scheduling challenges that this problem introduces for years to come.

The opioid addiction crisis in America is finally getting the recognition it deserves from public policy experts. There’s no consensus and no action yet, but in 2017, the New York Times reported that the leading cause of death for Americans under 50 had become drug overdoses.. While the crisis continues, medical administrators get hit with it from both sides. Not only is the healthcare system bearing the brunt of treatment of addicts and overdoses, but it also is being called to account for getting many of those individuals hooked on the drugs in the first place.

Although overprescription of opioids is at heart a medical responsibility that rests with the prescribing physicians, the industry as a whole is culpable for the environment that has enabled—and possibly even encouraged—that problem in the first place.

These structural issues are squarely the responsibility of healthcare administrators to address. Whether by instituting better controls over drugs, or finding alternative pain management therapies, many administrators will spend the year ahead dealing with the opioid crisis.

3. Tinkering with the Social Safety Net

Some of the contributing factors in opioid overprescription are merely symptoms of a larger problem looming in American healthcare… a culture and insurance system that encourages quick fixes such as pills for what are often complicated medical problems that more comprehensive treatment would be more effective at resolving.

But the social safety net, comprising private insurance, Medicare, and Medicaid, has been fraying in recent years and looks to be coming under more pressure soon. Speaker of the House Paul Ryan promised action on both Medicare and Medicaid in 2018. Administration efforts to dismantle Obamacare and roll back benefits on government insurance programs threaten to make cheaper care alternatives even more normal… even when they contribute to other long-term problems.

Not only could these efforts reduce the insured population and reduce compensation, but regulatory changes that are likely to come along with those reforms will create upheaval in billing and standards associated with treating patients. Administrators will have to make sense of the changes and guide their organizations through the resulting turmoil.

Not only is tinkering with social safety net programs likely to create future changes in compensation and coverage, but previous changes are still coming into effect and creating challenges for medical administrators. MACRA, the Medicare Access and CHIP Reauthorization Act, was passed in 2015 and radically altered reimbursement through a phased-in adoption of value-based billing systems.

Medical administrators will be sorting through the shifting options for value-based reimbursement through 2018 and beyond.

Much of the recent attention that has been focused on healthcare costs and reimbursement has begun to highlight another area of concern that will begin to consume the time and attention of healthcare administrators: patient outcomes.

Although the American healthcare system is among the most advanced in the world, it’s also the most costly. And despite the breakthroughs and advanced treatments pioneered here, the lack of universal coverage leads to a concerning discrepancy… patient outcomes have actually dropped below those in countries that spend far less on healthcare.

This concern is currently in the larval stages, but it’s poised to rise quickly toward the top of the list. Neither patients nor insurers nor taxpayers like the idea of paying more for less, and pressure can drop onto healthcare administrators rapidly once that feeling surfaces.